Haaland, who hails from Stavanger, Norway, has during the last years exhibited his paintings in Norway, Italy, Germany, Holland, England, USA and Monaco. 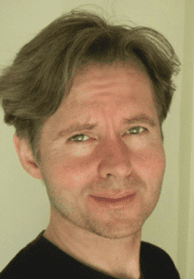 Haaland was educated at the University of Stavanger and the University of Trondheim (NTNU), where he majored in history (Cand.Philol). He also has a degree in visual communication, design, graphic design and music. He is the author of Fra Rogalands Middelalder, a book based on his studies of the middle ages.

Among his latest paintings, the emphasis is on motives related to the arcitecture of the Mediteranean and European cities. The different building facades are given special attention, often seen as reflections of the windows of the new, modern stores.

Whilst the style is mostly figurative, the abstract is apparent in several of his works.

The italian newspaper Il Tempo described Haalands style in an article as "Dettagli Come Ispirazione" (Details as an Inspiration). Also the italian art magazine, ex @rt, has described his pictures in the article, "Kjetil Haaland: In silenzi di un norvegese", in conjunction with his exhibition at the Galleria Il Saggiatore in Rome.